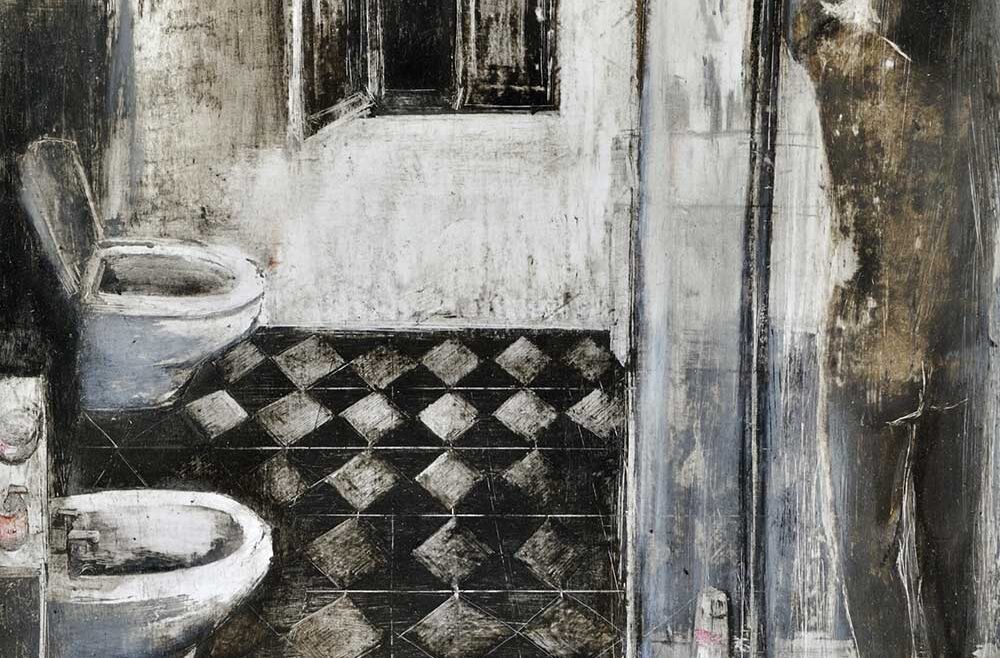 Someone once told me: “She needs to own a place to paint”. What seemed to me an incomprehensible sentence, I only realized many years later how true it was.
It’s just like that. In order to paint something, I have to make it my own. Photography has never been enough for me; I can’t see anything through it. I have to go inside the place to paint it: walk, stay there, feel its smells, sounds; get to know it through the objects and the people who live there. Drawing, stationary on paper and in head visions, lines, lights, and shadows. I record, I collect the visual material I need to then disassemble it, rebuild it and tell it in my own words. The objects that inhabit a place reveal to me stories of who lives that place or has lived it and it is here that I feel the urgency to paint: to tell stories, stories of Beauty and mysterious existence of everyday life.
The copy of reality as an end in itself does not interest me, the real fact is only the starting point of a deep creative process that leads to a reversed, invented, deformed reality, truer than the True for me. 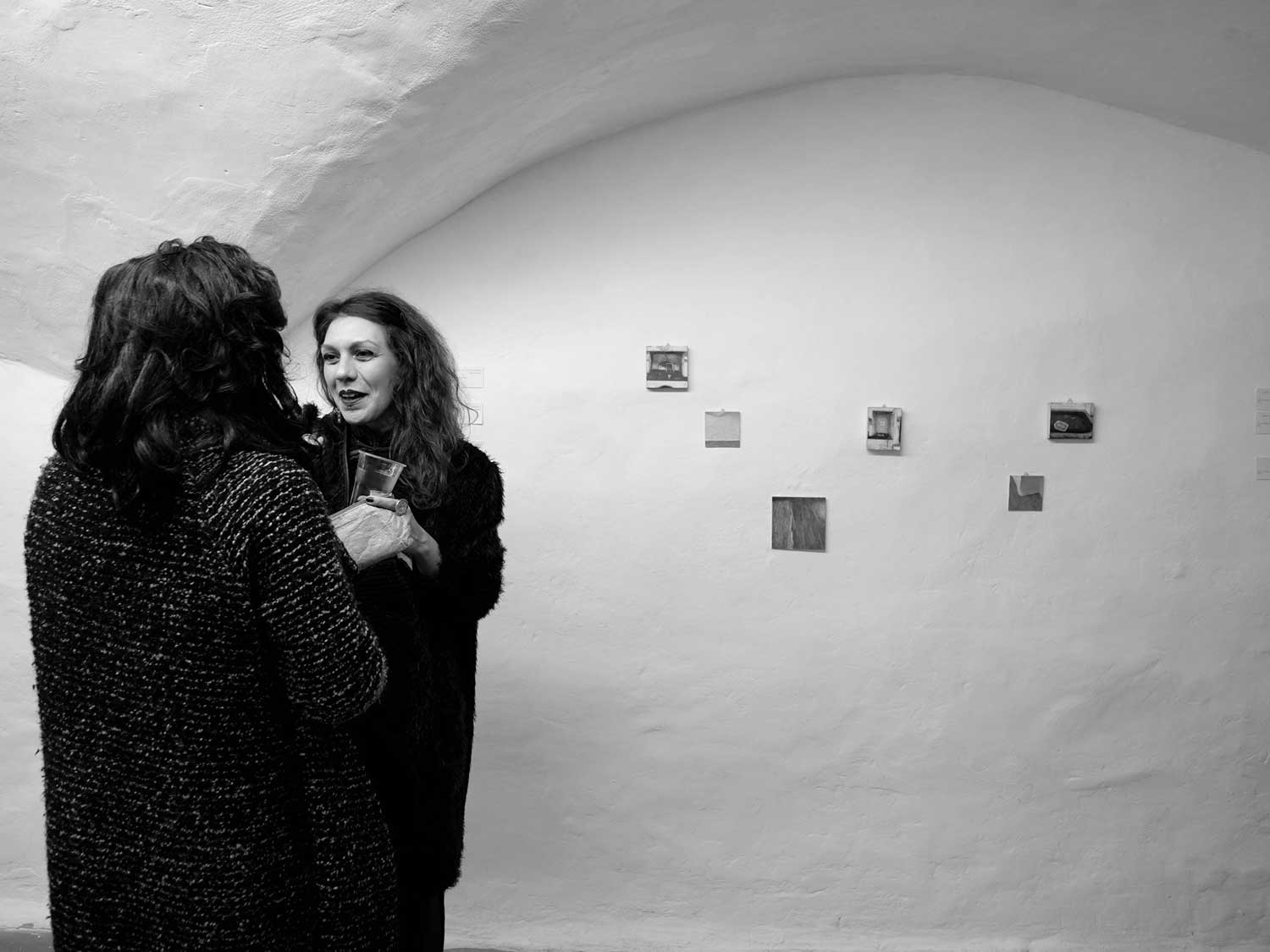 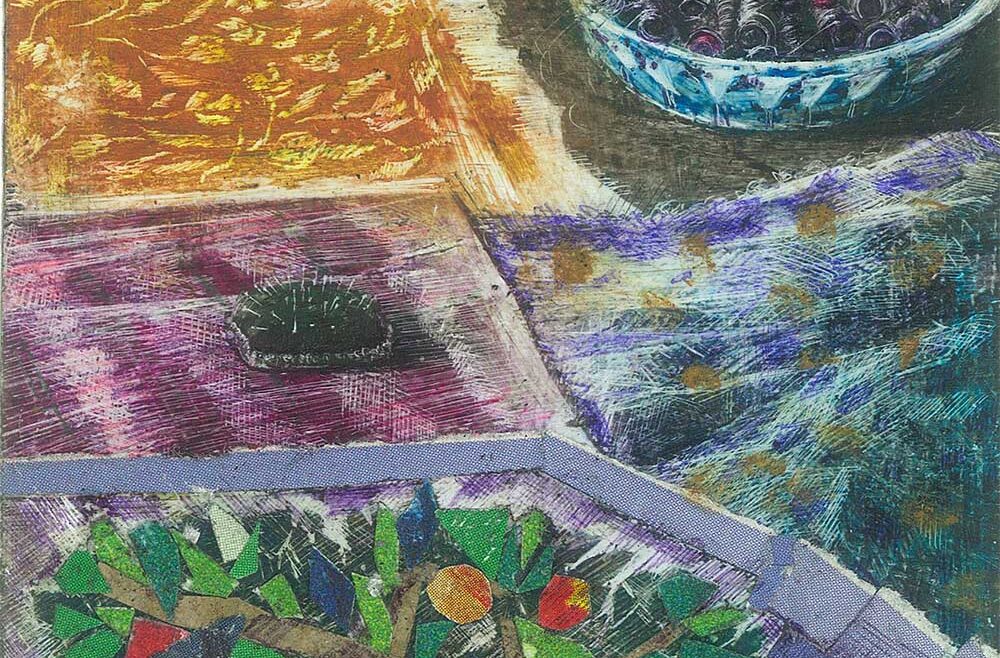 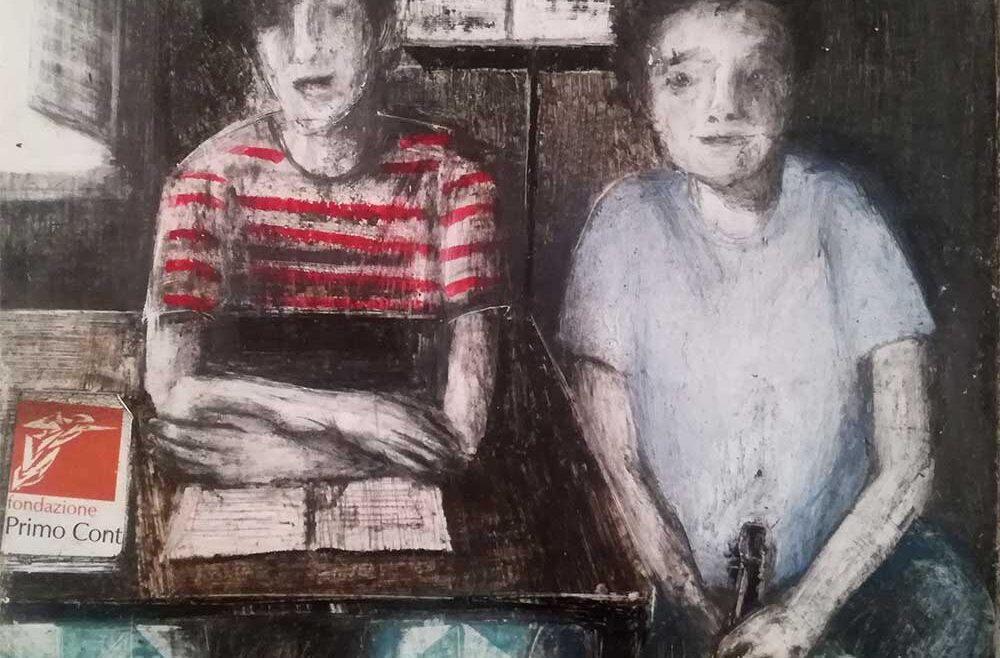 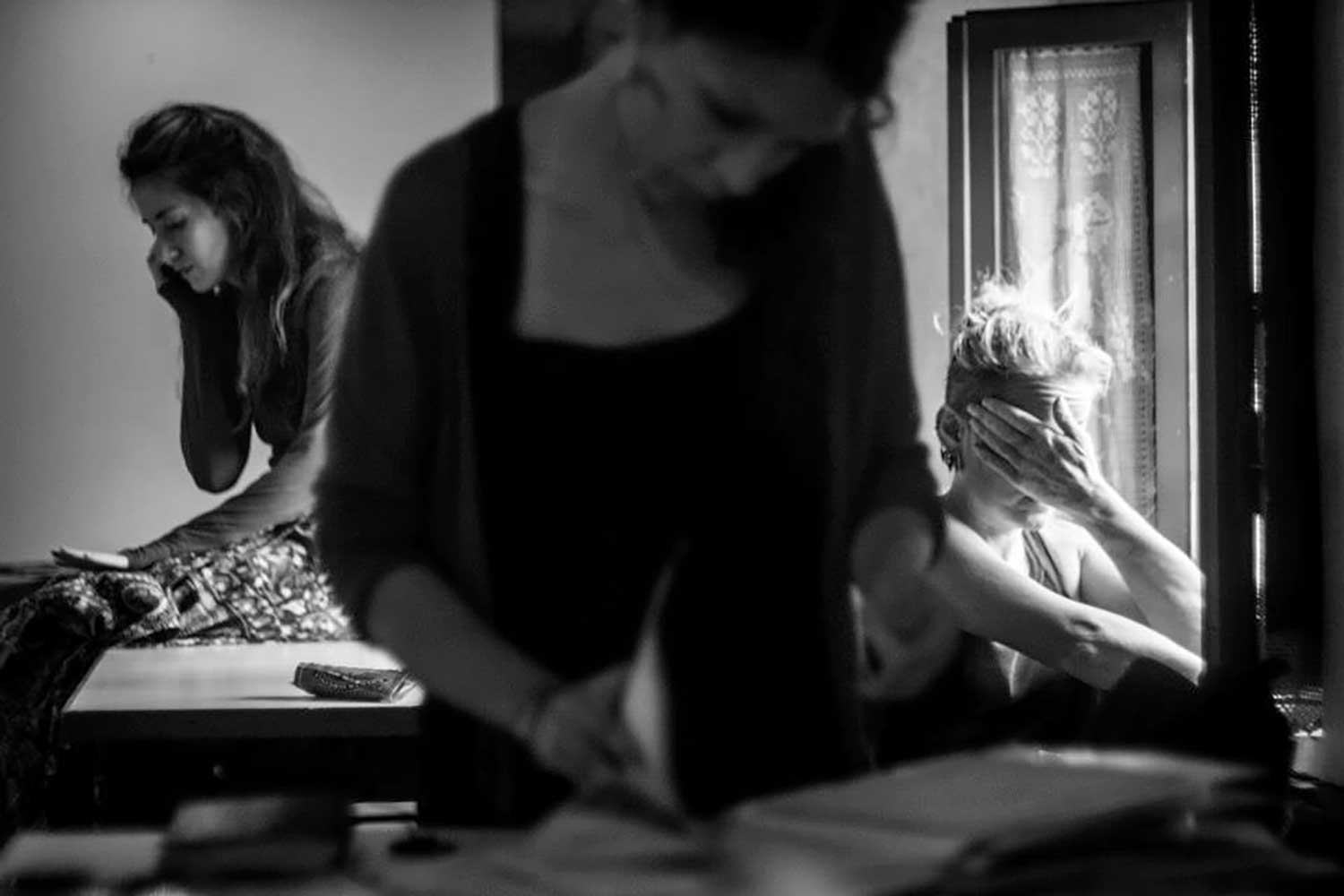 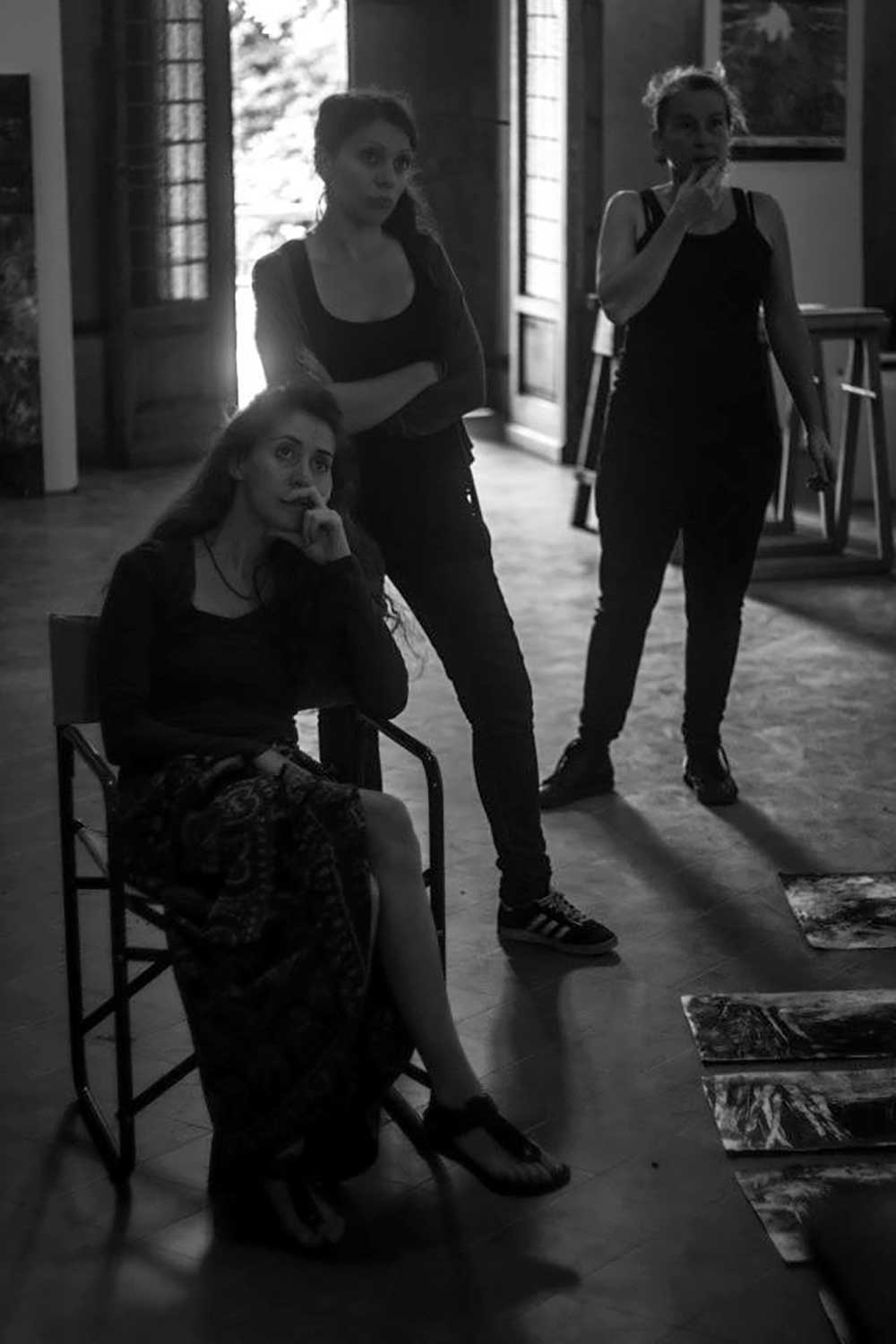 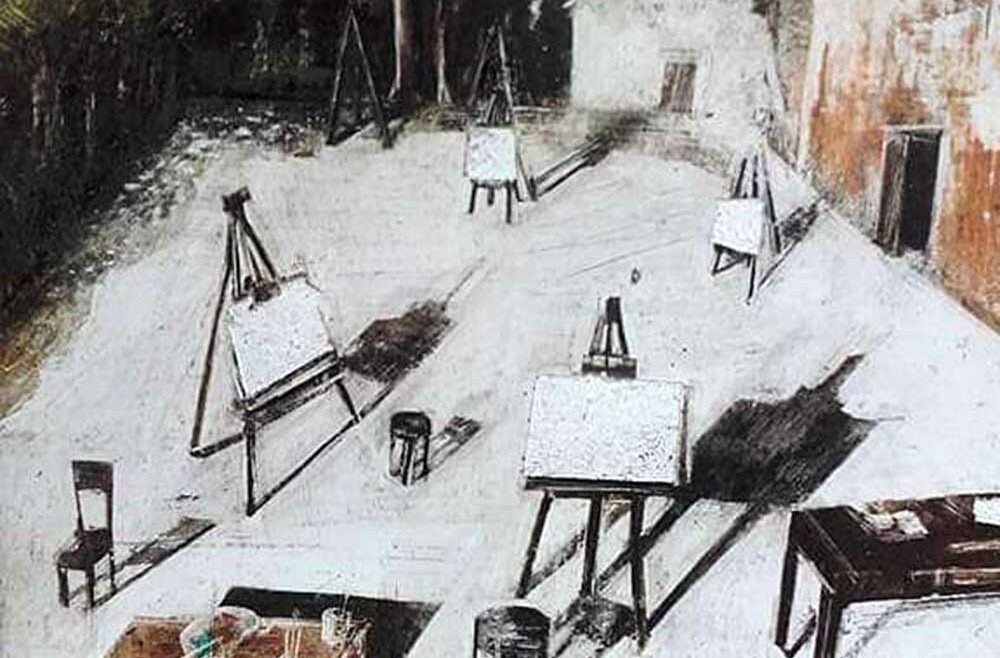 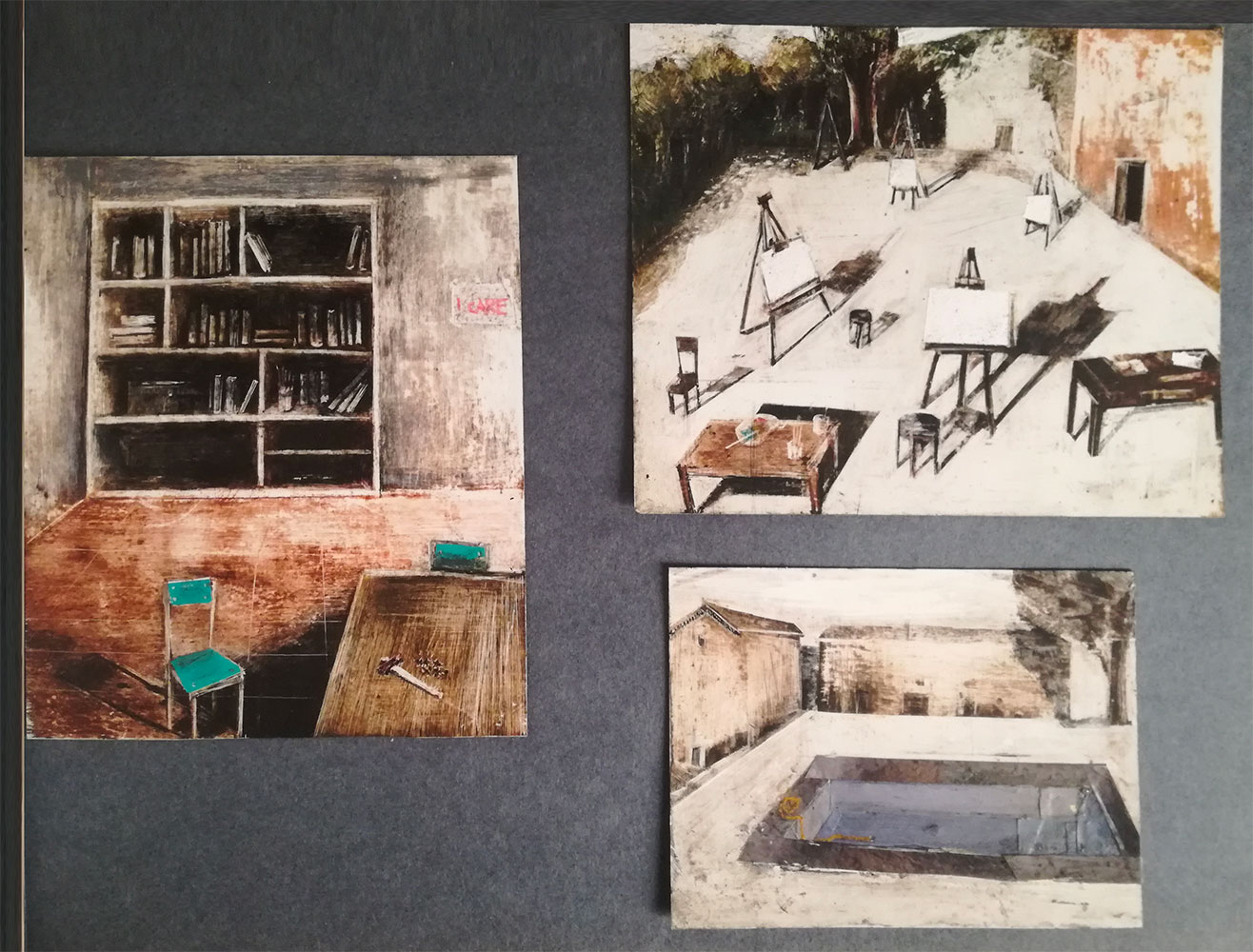 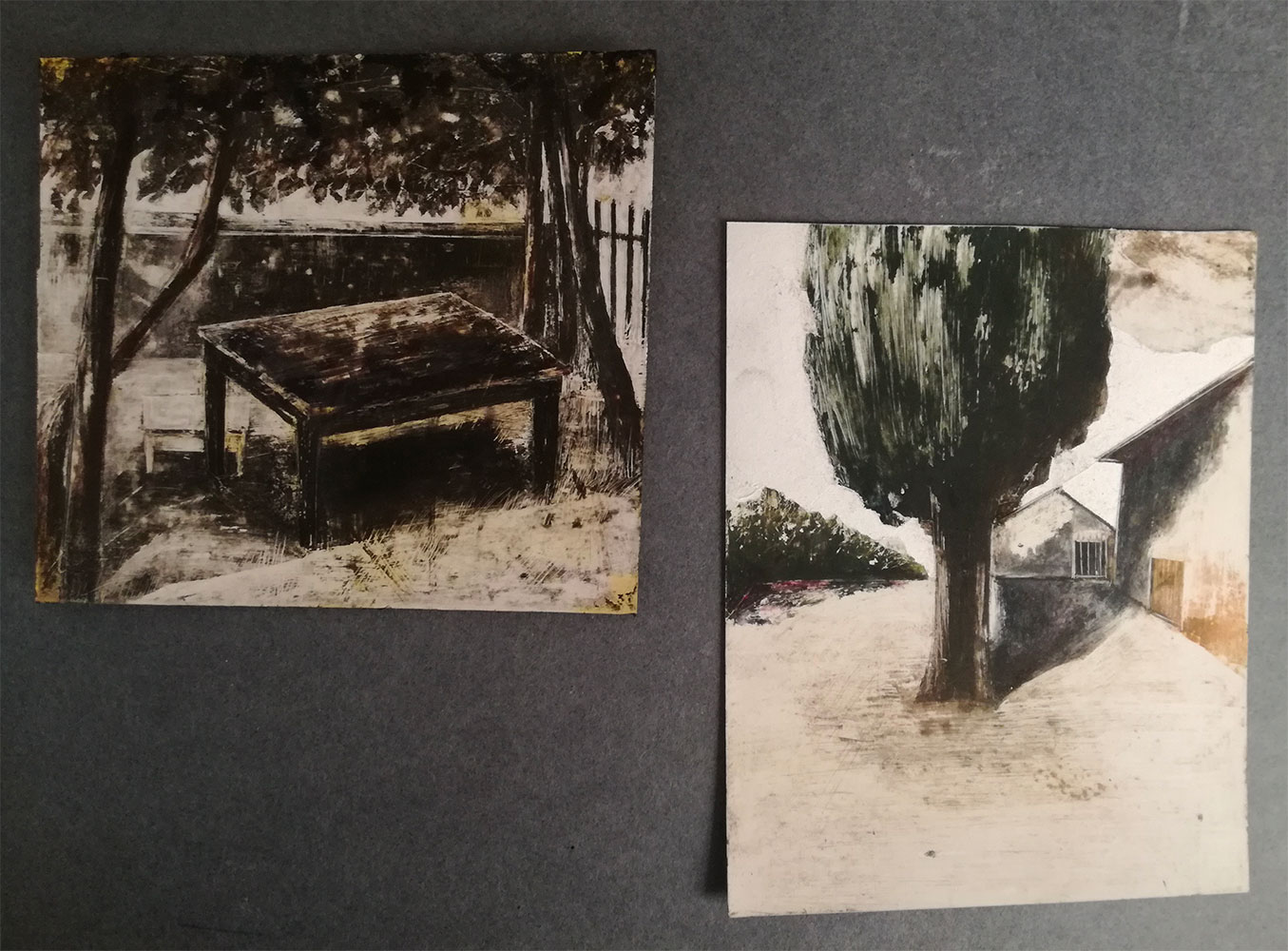 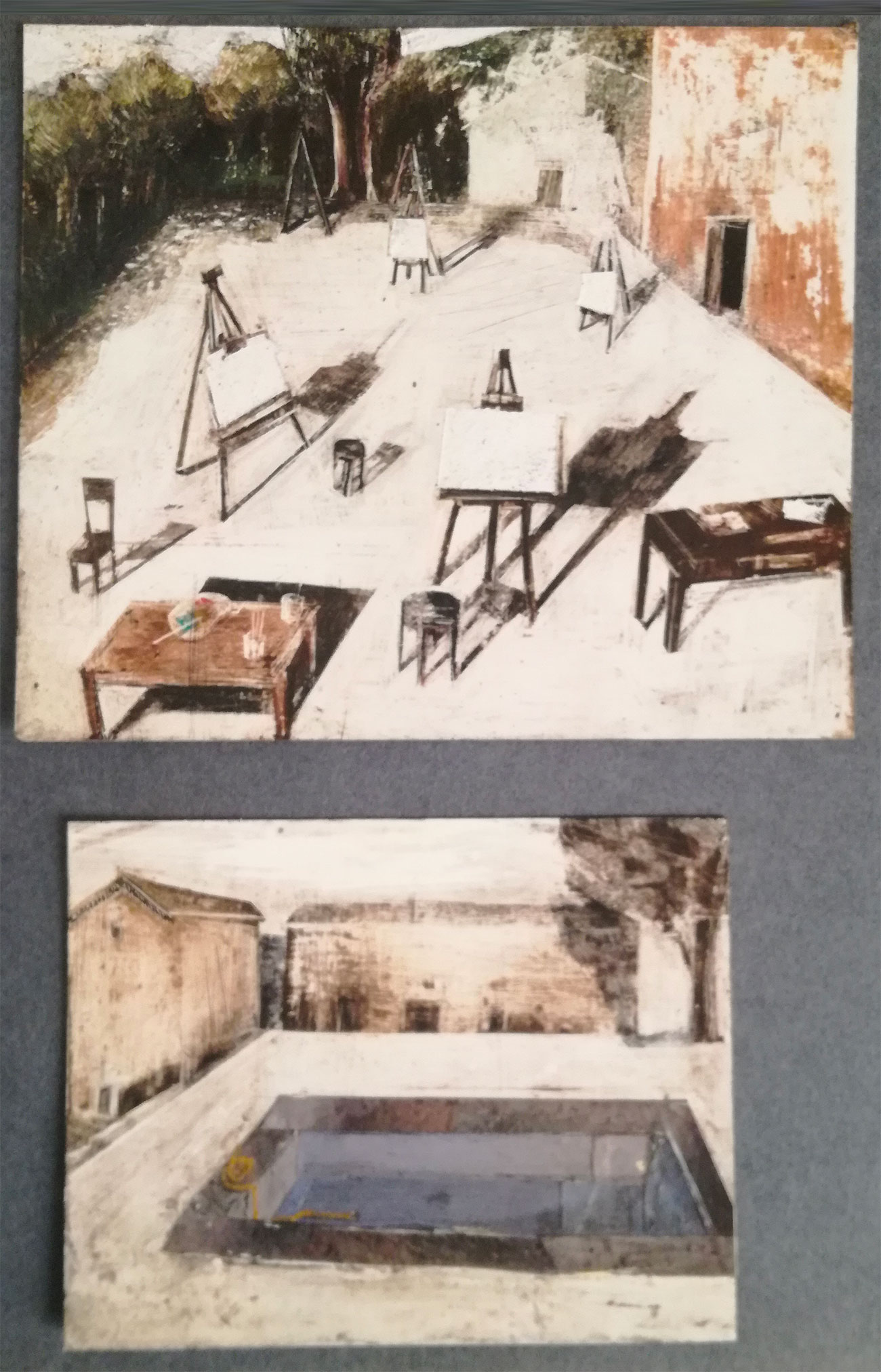 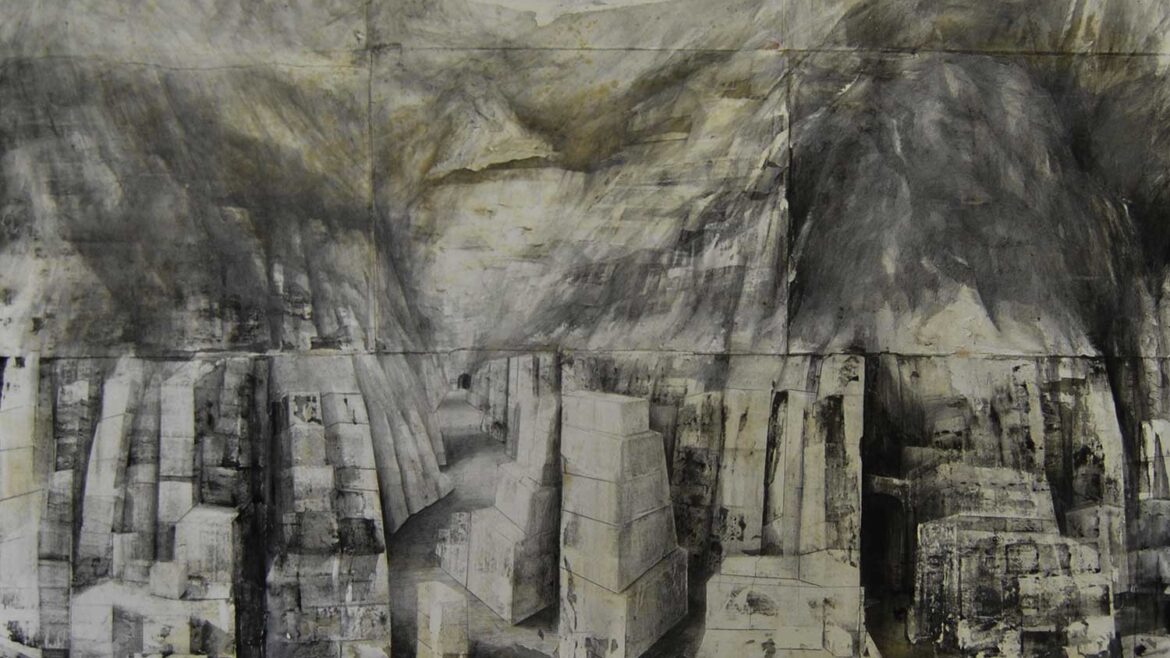 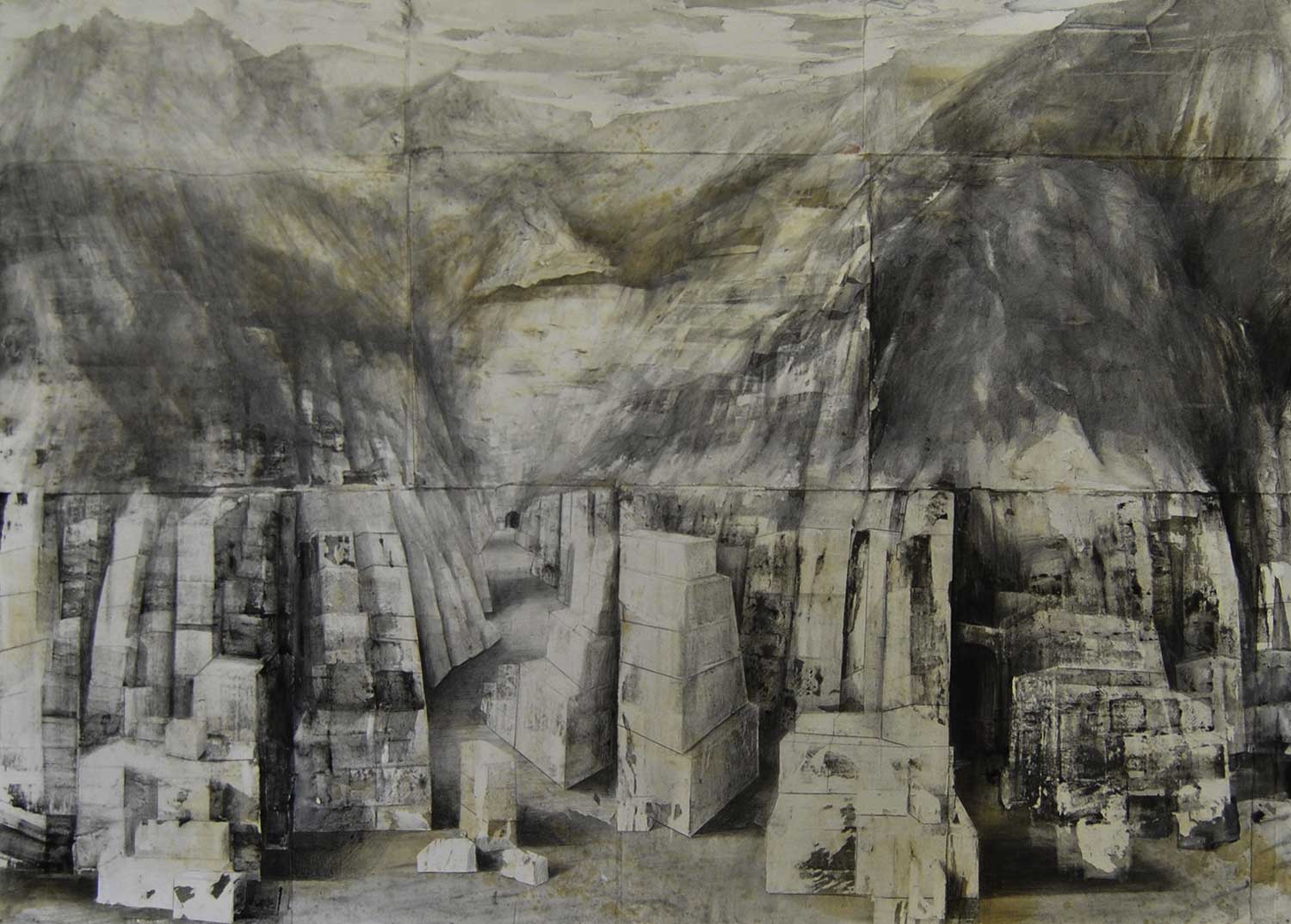 Strange summer that was the one in Terrarossa. It started with an earthquake and with the desire to tell that place by the portraits of its people. But, like every summer, I forgot there is always something distorting the plans, an image that imprints itself in the eyes and never leaves you. I had never seen the marble mountains of Carrara, nor a landscape had ever strongly impressed me this much with always new and different suggestions. The marble quarries were a revelation, a vision. Cut mountains that at times seem like giants wounded by man, at other times a miracle; it is a strange place in which the relationships between man and nature are confused, in which the quarries are lacerations, but also creation of unique and visionary landscapes: sculpted cities, marble cathedrals born from the green of the mountain. They have always been there, since ever, they generously give us their most precious part. Rebellious mountains, anarchist like their people, they were there, already drawn, with their dark masses slain by white waterfalls.
(Terrarossa, estate 2013) 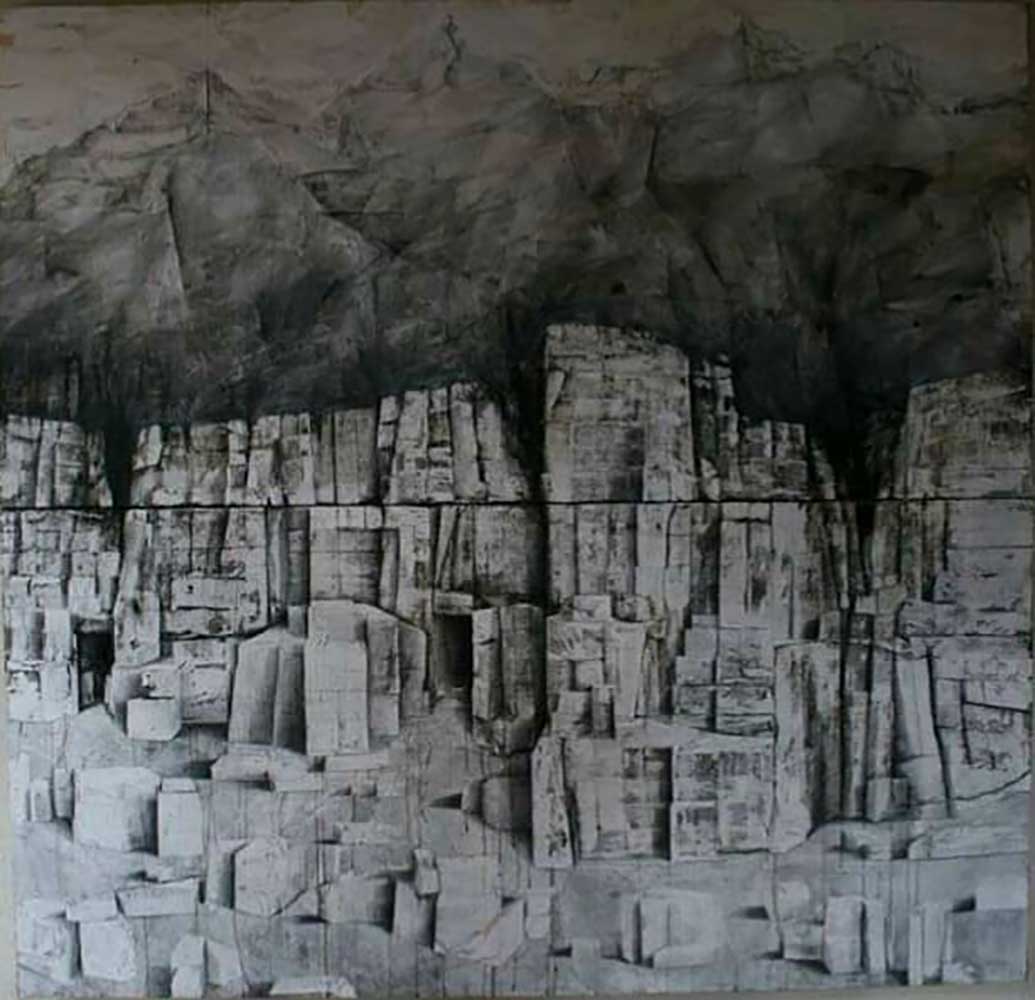 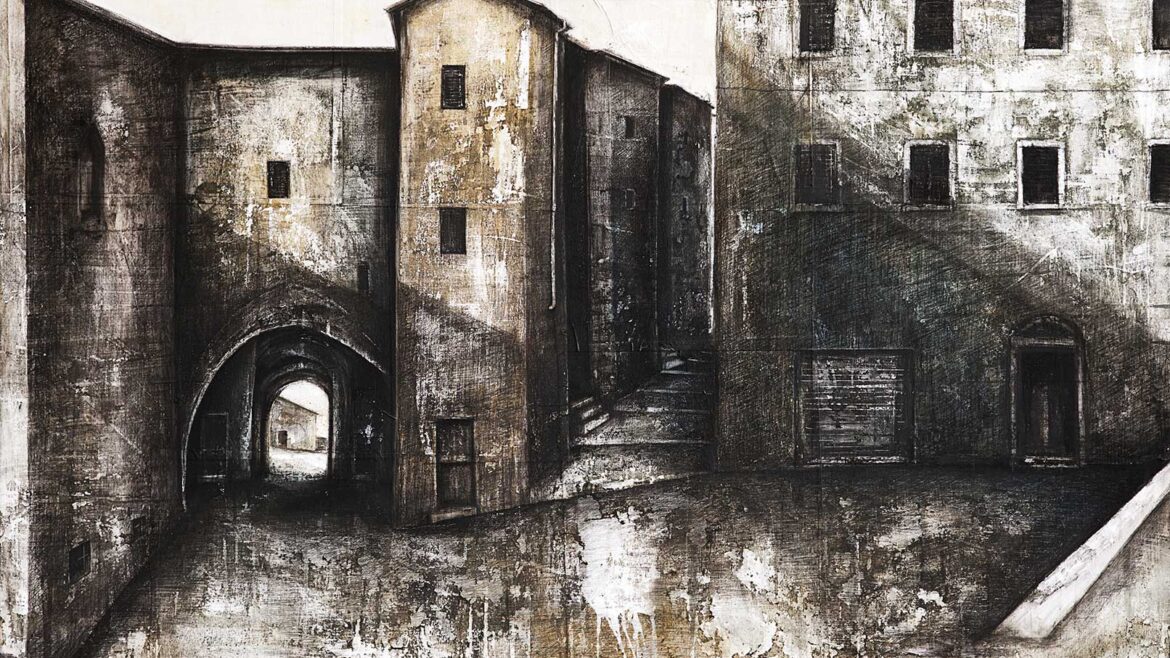 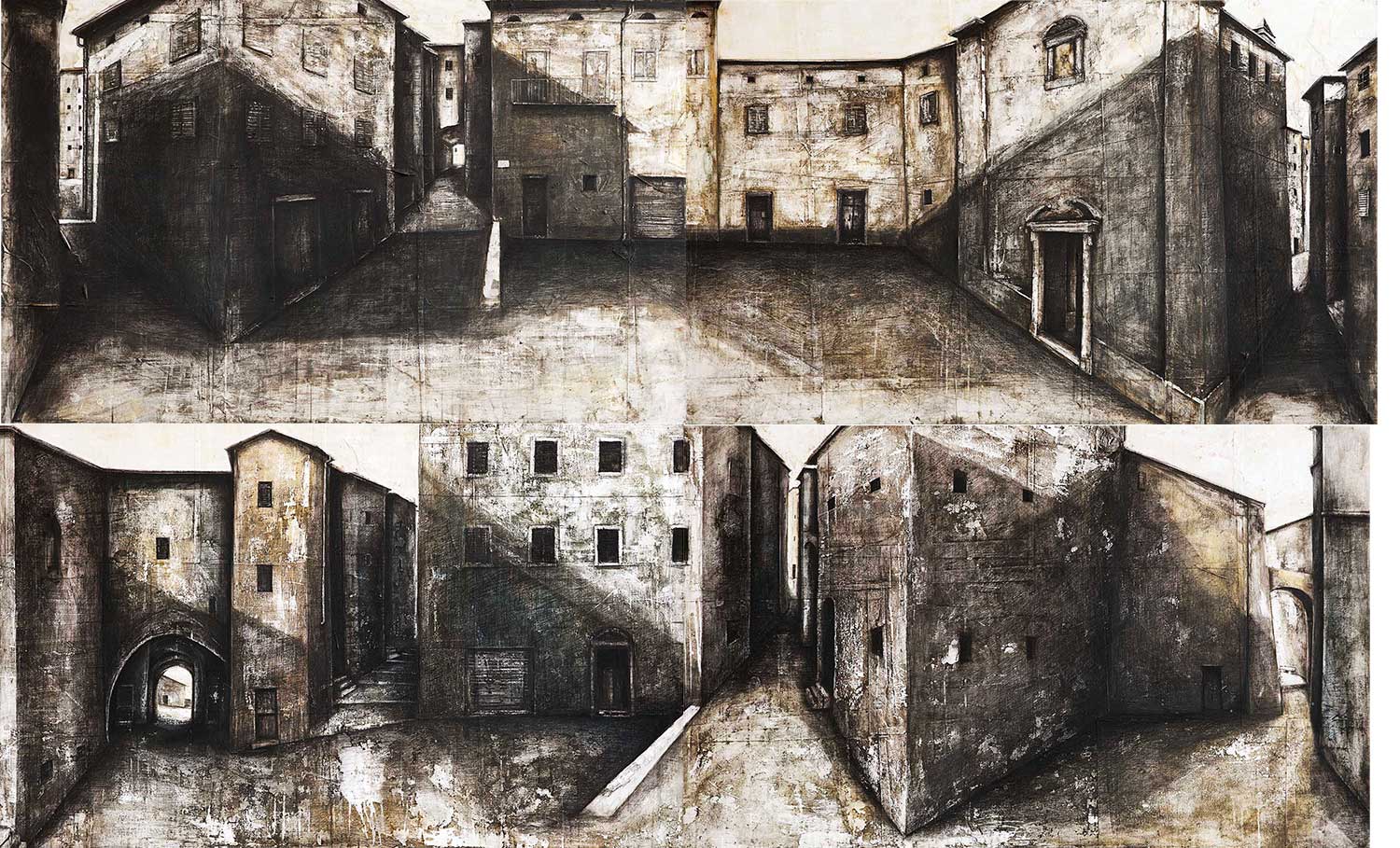 In sharp contrasts and in dark blacks, Debora makes us think to arcane sets of Appia or Craig, where architectures seem dismembered and deconstructed, devoid of a linear vision, but for this reason also unsettling and involving.”
Mauro Partesi 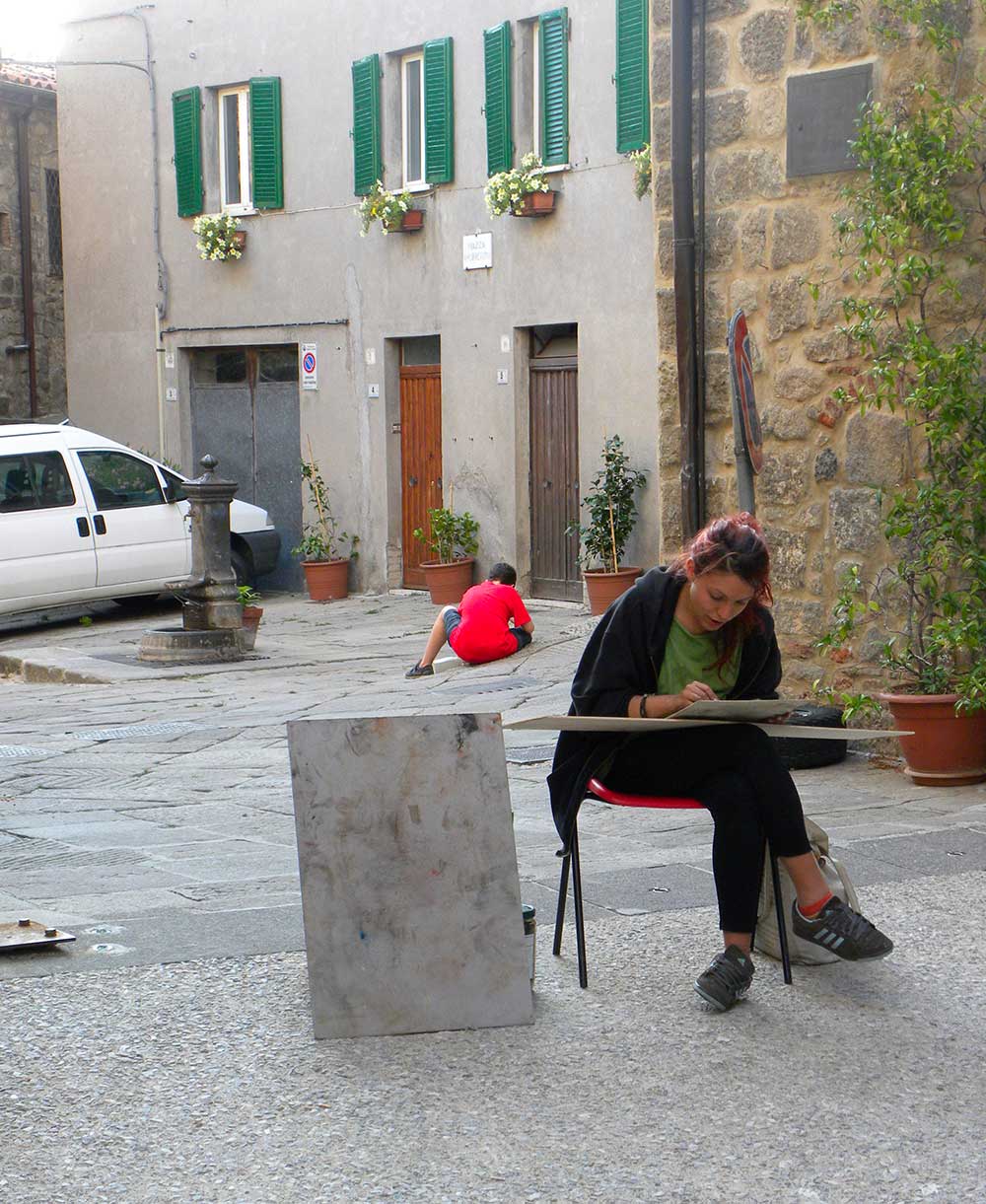 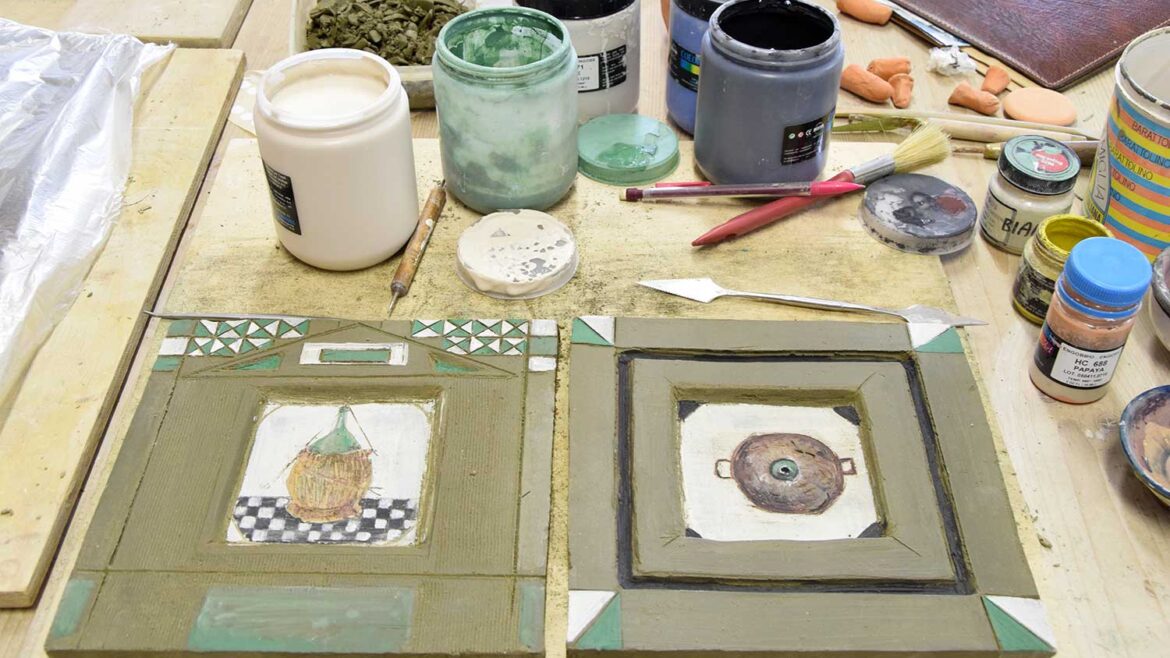 “In “Porta del vetro e della paglia”, Debora Piccinini makes a synthesis between signifier and signified, building a symbolic repertoire and an ideographic language, which sums up history and micro-history emerged from events and memoirs collected among people who worked glass and thatch, essential handicrafts for the local economy and ingenious result of the recycling of waste materials on the territory, at the boundary between self-consumption, industrial and handmade production. The creation of a decorated portal which documents the whole flasks production chain is the expression of the conversion process of the everyday object into a sacred image. Symbolic figures which take on the archaic values of the community they belong to, of its identity which has consolidated itself in work, finding its strength in social cohesion, but also symbols of the creative power of the human being, of his touch and his vital breath still imprinted in the blown glass bubbles.
The site-specific installation located at the entrance of the monumental complex of the “Muratine” in Pontassieve, in the central square of the town, chooses to confront the authenticity and simplicity of rustic art in the use of materials, techniques and the choice of subjects, with panels inspired by the Baptistery and and the Bell Tower of Florence and by the decorative motifs of the marble inlays, typical of Tuscan art since ancient times.
Every single panel is the result of long hours of work spent at the Giusti furnace in Paterno, where the artist had the opportunity to reflect on the comparison between the human dimension made of exchanges, waitings, meditation and second thoughts, which are typical of handicrafts, and the frenzy of rhythms of production and consumption imposed in industry.”
Valentina Filice